The Art of the Color

Okay, so I know everybody is waiting with baited breath for this news so here goes.  My desk has shipped.  Once it arrives in Harrisburg, Watkins will contact me and set up a delivery date.  Good thing I finished patching the archway yesterday.  All it needs is a coat or two of paint.
Yesterday I was thinking about this government shutdown.  For white Republicans, whether they know it or not, this will be their Waterloo.  Of course, many of them are still waiting for the Idiot Jerk in the White House to declare a National Emergency.  At a cabinet meeting yesterday he implied he was moving away from that idea.  To do so would prove to everyone that this man, who supposedly wrote a book called "The Art of the Deal," knows absolutely nothing about deal making.  Declaring a National Emergency is similar to his bankruptcy tactic in which his wheeling and dealing fails and he's forced to run away.  The fact that he, and the millions of white Americans who support him, have no problem in depriving other Americans of their ability to buy the basic human necessities shows, indicates how deep their racism runs.
On a much brighter note... and I do mean brighter.  The bicycle team I follow, , Education First / Drapac, revealed their new kit yesterday.  In case you didn't know, EF rides Cannondale bicycles, which has always been my bike of choice (I own 2).  And their kit is bright. 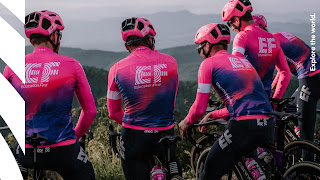 EF embraces diversity through Education.  They released a snazzy little video which talks about themselves as a team and what they aim to do for the world.  Take a look.


Now, don't that bring a smile to your face?

Email ThisBlogThis!Share to TwitterShare to FacebookShare to Pinterest
Labels: Cannondale, Donald Trump, EF Drapac, Republican, The Art of the Deal