Well, it's Monday and this is the beginning of my weekend.  There are those of you out there who have to go to work today... well, that is how life works.  Today is probably going to be busy for me.
I finally got the check from Greenfield (Graysonview) and it was made out to The Estate of Irene Snyder.  I had never set up an estate account since everything was already in my name.  Now, it seems, I will need to do so in order to cash the check.  After the check has cleared, I will withdraw the money and close out the account.  I think this is a little bit of bullshit.
Yesterday I did have an interesting conversation with a customer who had been down in Georgia last week.  He told me he went to Sunday School there... and I kind of smiled to cover up a minor groan.  And then he said Jimmy Carter had led the service... at this small church in Plains, Georgia.  Of course my attitude did a 180 switch because I realized he was talking about the Habitat for Humanity Jimmy Carter, an American Icon.  He was talking about a president who has morals, and values, and who is the total opposite of the Moral Degenerate in the White House.  I wanted to ask questions because... you know?  Jimmy Carter is the only living president who is beloved... except by the white Republican Party.  Silly me, the first thing out of my mouth was "how tall is he?"  Duh  Did I ask what he spoke of?  Nope.  I wanted to know how tall he was.  But then stature is important.  He's a great man.  Next to Jimmy Carter those Evangelical leaders who kowtow and praise the Moral Degenerate prove themselves to be nothing more than craven and power hungry failed souls.  They are not fit to wipe his boots, or wash his feet. 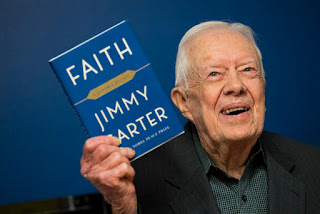 I understand the Idiot Jerk in the White House had a bit of a shit-tard session yesterday because of the breaking news in the NYT and the Washington Post about is possible ties to Vlad Putin.  History has told us over and over again that those voices objecting the loudest are the most guilty.  As someone else said, "he protests too much."  He desperately wants to be the 'Greatest,' he just doesn't know he will be considered the greatest scumbag voted into the presidency.  He will be the Greatest liar to sit in the Oval Office, and the Greatest Moral Degenerate to live in the White House.  Greatness is defined not by who kisses your ass, but rather by the compassion you earn by good deeds, and the respect you earn by putting the well-being of others so far ahead of your own selfishness.  He is the sad, mirrored reflection of those who hold him dear.