Well, today's Friday and I get to go back to work.  For 4 days.  Then off again.  I'm on 32 hour work weeks, hopefully until sometime in the early spring when sales begin to pick up again.
I rode 4 miles on my bike yesterday.  That was good.  I haven't ridden since before my Mom died.  Rouvy updated their software.  All my mileage disappeared.  That sucks.  The big change is that now you are actually riding down the road and on my TV that looks simply terrific... if I had a bigger TV it would be totally realistic.  See what I did there?  Totally realistic?  I wonder if that's a sign my mind is regressing.
Yesterday I also started fixing the archway between the living room and the dining room.  Back in Seig's puppyhood. he tried to dig a hole there... a very big hole.  The location of my Morris chair has always been a way to hide it.  Now, however, the chair is being moved because of the desk and the arch will be visible.  Right now all that's left to do is a little more spackle and some light sanding to feather the edges and it will be ready for painting.  In case anyone is wondering, here's a shot of the desk I bought, notice I'm not showing the arch, that incident was irritating. 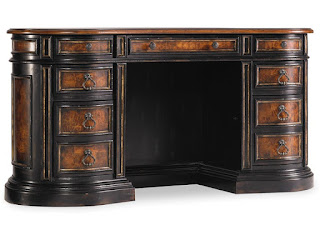 I am anxious to see how it arrives.  I bought it from Amazon and they wanted to charge me an assembly fee, however I've checked on several other websites and they advertise it as "shipping assembled."
Yesterday the Blue House passed funding for the government.  The Idiot Jerk says he will veto.  I saw where he wants the military to string razor wire along the border.  This guy is an ugly racist from hell, isn't he?  The fact that he represents a base that is virulently hateful of brown skin is... frightening.  As the population of America continues to evolve, and for those who don't understand it is evolving, this group will begin to segregate themselves into smaller and smaller communities.  I wouldn't be surprised if they end up in North Dakota somewhere.
Today we will have to watch and see if Wall Street rallies... maybe a little.  Here lately it seems to be five steps down and one step back up, five steps down and one step back up.  Financial periodicals are being to ponder if the Idiot Jerk and Republican economic policies are to blame.  Well, he wouldn't be the first Republican president to shit on the economy.
Posted by Dave R at 6:14 AM