Friday and I'm halfway through my 4 day work week.  For the next couple of weeks I'm only working 3 or 4 days in a row, which is fine with me.
Yesterday I received an email from Cymax... you know, the 3rd party seller from whom I bought my desk, and they will accept a return as long as I pay a $456 restocking fee plus freight.  Of course. I was on the phone with Amazon.  Because the desk isn't damaged, and it's not the wrong desk, they recommended I accept delivery.  I immediately began contacting friends.  The problem is the packaging size, not the desk size which means ironically, that for the first time in my life I'm have a problem with the size of the package.  As for Cymax, I can only think bad thoughts.  I'm beginning to think that maybe, instead of calling Amazon, I should have called Nancy... Pelosi... you know?
And what did you think of the comments made by Wilbur Ross yesterday?  This moronic billionaire actually advocated Federal workers get a loan...  and so what if they have to pay a little interest.  Just how out of touch is he with America?  In fact everyone in this administration increasingly demonstrates wealthy minded stupidity.  Yep, all of them have dumbed down by dollars.  Rocks have more sense then these people do... literally. 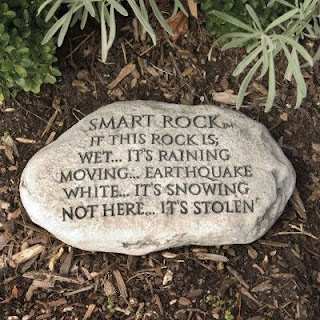 And two bills to open the government failed in the Senate yesterday.  The important thing is that the one sponsored by Democrats had 6 Republicans flipping.  If 6 more had flipped, it would have passed.  My money says that "shit" was not the word that popped from the Idiot Jerk's mouth when he heard that since ....

AND THIS JUST IN..... ROGER STONE HAS BEEN ARRESTED IN FLORIDA!

Of course, Reuters had the headline first, followed by BBC...  Way to go Mueller!  This is news to wake up to, isn't it?  Maybe I should have save the Rumble, Rumble post for today!
Posted by Dave R at 6:30 AM