Saturday, the 1st of December... which means we're going to have a super duper Kid's Workshop in the store... and it's supposed to rain.  Yippee!
For those who don't know it, the Idiot Jerk in the White House had a very bad time yesterday... all... day.  As if Michael Cohen's guilty plea wasn't bad enough, or the fact that the written answers he turned in to Mueller most likely just defined him as a lying sack of shit, the worst of all possible things happened om Argentina.  His Homo Bromo Vlad two-timed him with a Saudi prince... in front of the world. 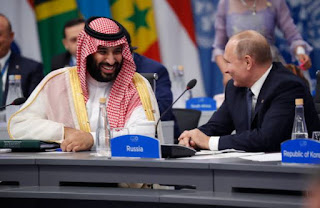 Look at those smiles!  My money says someones getting a little sugar on the side.  I can't remember the last time I saw 2 dictators giggling like little girls.  Of course, this pissed off the Idiot Jerk.  Face it, the prince is much younger and has real hair.  I've heard he's a real dynamo on the dance floor as opposed to the Idiot Jerk who struggles with a simple two-step.
And, of course, George H died.  I think it's unfortunate he will mostly be remember for his comment "read my lip.  No new taxes."  Like so many other people, he had been duped into believing Reganomics was going to work.  Republicans have always been terrible when it come to economics, in fact, you have to go back to Eisenhower to find a Republican president who left office with a solidly working economy.  Reganomics started failing right after his re-election because the only thing trickling down were the bills.  The tax breaks given to the corporations were finding their way into executive's pockets, rather than down to the common man.  This is why George H had to raise corporate taxes which is why he went on to lose his bid for re-election.
At some point the Idiot Jerk is supposed to have dinner with China's Xi.  I wouldn't be surprised if the first questions out of Xi's mouth is "where's my $50 million penthouse?"