Get the Red Out

Okay, so I just listened to the sound of wind on Mars.  NASA has a recording.  They have amplified and speeded up the sound so humans can hear it.  One commenter says it sounds "otherworldly."  No it doesn't.  I've heard the same sound sitting in my car at a red light on real gusty day.  Still the hearing something new generated my interest enough so I listened.
And I was sitting at the empty flooring desk yesterday when I heard that Nicky Ayer's turned down the Idiot Jerk's offer to be Chief of Staff...   Is the result of his separation anxiety about not getting enough Pence time... or has he seen the writing on the wall?  I mean, how many rats waited until the Titanic was going down to jump on board?
As for my latest project?  It's coming along fine.  I'm going to be turning over a decent chunk to my editor.  He asked if the pages would be paper or electronic.  He's getting paper.  In certain ways I'm old school.  I told him I'd give him a marker.  He said, "don't worry, I have a red ink pen."
And speaking of red... there's a good possibility the stock market will be pro-active in a negative way today.  The Meng issue, you know?  The administration says her arrest was not political, but everybody in the world knows what a lying sack of shit the Idiot Jerk and his sycophants are so only a fool would believe them.  And China is pissed - big time.  This is the sort of 'big deal' the Idiot Jerk likes to brag about... but don't look at his bankruptcies, if you do you'll realize a lot of people get financially hurt with his 'big deals.'  In fact, one of the big concerns right now is so many other countries are looking at the US as failing and China as being... more correct, more fair, and possibly more powerful.  There is no reason for them to keep their allegiance with us especially because we all now know the Idiot Jerk couldn't run a successful cluster fuck even if he tried.
Finally, what about all of that snow down in the Carolinas?  Woah!!  The corrupt Republicans were so concerned about maintaining power, they never thought they'd have to contend with charges of hellacious  voter fraud, let alone end up in a rather low grade Christmas TV special. 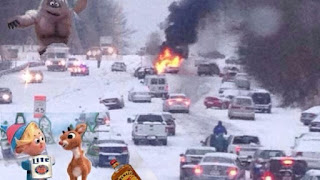 Of course this Bumble might be just as fake as their voter registry.
Posted by Dave R at 6:43 AM