The Good, the Bad, and the Nominations

Okay, so the Golden Globe nominations came out yesterday - they were interesting.  However, one in particular stood out.  A nominee for Best Actor in a Comedy or Musical was that every popular Christian Bale.  You know who I'm talking about, he's a real cutie (with a bit of a temper).  He plays Dick Cheney in a movie called "Vice."  And it's considered a comedy...  Are you laughing yet?  What caught my attention was his picture.  He gained a couple of pounds for the film, as you can see. 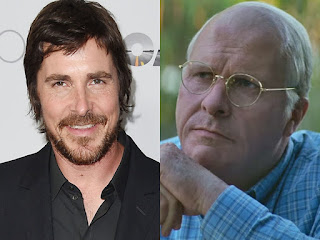 If you're like me, you can smell an Oscar nomination.
So I had a conversation with Met Life yesterday about my Mom's funeral benefit.  I was told they mailed it to me on Tuesday.  I was a bit harsh - no language, I don't curse or swear at people over the phone, it does no good.  My voice usually drops an and I use phrases like 'lack of professionalism' and 'demonstrating the total inability to understand the distress,' and 'failure to show any consideration.'  The agent kept repeating 'my condolences,' and how it takes them 7 - 10 business days to process the paperwork.  Of course that's pure bullshit.  This is the age of computers.  You report a death and the agent clicks a box on his / her computer screen which sets some future date for the paperwork to be generated.  In today's high tech world the first human hands to touch that paperwork might actually be an associate as the envelope is loaded into a tray for a bulk mailing.
And now for a bit of irony.  In the project I'm working on there are 2 characters with the last name 'Blanchet' who work at the Louvre.  Gerrard is the Directer of Antiquities.  Last evening, while researching organizational positions at the Louvre, I discovered that the actual Directer of Antiquities' last name is... Blanchet.  I'm not too good at Probability, if anyone is, can they give me the odds of that actually happening.
And finally for today's funny bit.  The Idiot Jerk in the White House wants to nominate Heather Nauert for the position of Ambassador to the United Nations. 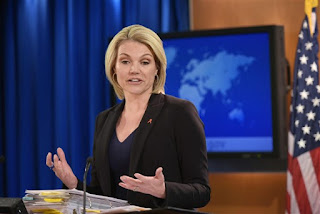 She's a spokesperson for the State Department and has been for about a year and a half.  She has no political... or policy experience.  Nikki Haley was a 2 time governor - that's experience.  So, what does Heather have going for her besides being blonde?  Well, before she became a Spokesperson, Heather was an anchor and correspondent on Fox and Friends, the Idiot Jerk's most favorite show.  Evidently that was a Home Run on her resume.
Posted by Dave R at 7:36 AM