First let's get some stuff out of the way.  Evidently Ryan Zinke is slinking away after doing his best to trash the environment... and getting replaced by a lobbyist.  Qualifications mean nothing to the Idiot Jerk in the White House.  We have some douche named Mulvaney who's going to become evidently a Temp Chief of Staff.  Is it just me, or do all the jobs in his administration seem to be manned as Temp Positions.  Any way, back in 2016 this Mulvaney jerk made comments about the Idiot Jerk being a "terrible human being."  So... do you really think he's going to be getting along with the Idiot Jerk in the White House?
And now what some readers have been waiting for.  I went to see "Aquaman" last evening.  I thought I might see some overweight fans dressed up in yellow scales... I didn't.  Most of the audience, which was fairly large looked like your average movie fan.  The movie was scheduled to start at 7 PM and started at 7PM - there were no trailers for coming attractions.
The first thing that surprised me was Nicole Kidman as Atlanta, Arthur's mother.  She does action sequences... well.  Wilhem Dafoe, who does a very good job in a very quiet role.  Of course, every wants to know how Jason did...  Sixpence wants to know if he "pulls it off."  His shirt?  No, it's already off and is for most of the movie.  I was concerned he might be Jason Momoa all through the film... sort of like some Jack Nicholson movies, where he mostly plays himself playing a character.  Well, Jason does at first.  Interestingly enough, he transitions... and by the final action sequences the audience gets to see this as he turns from a beer guzzler who takes selfies with bikers into hero.  By the end of the film he is Aquaman.  The only issue I had was his name.  You see, Aquaman's human name is Arthur Curry, and (mini-spoiler here) when he becomes Aquaman he's called 'King Arthur,' but only once.
Director James Wan has a history of horror and action.  The action sequences are tight, quick camera moves, quick edits.  The horror?  Well, there's a moment high reminiscent of that classic moment in Aliens where Sigorney meets the Alien Queen Mother Bitch.  It was surprising and effective. 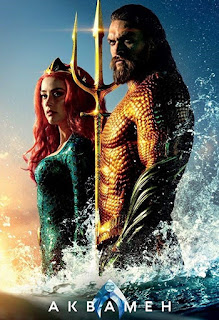 What makes a movie good?  Well, if in the end you believe something.  There was a lot of applause from the audience because something clicked, because in the end you really do get to see Aquaman.
Posted by Dave R at 6:11 AM