Camp Paradise is back.  That's the Chaturbate site with the naked, blond Russian chicks who for some reason find my blog interesting.  I should thank them for being loyal readers, so here goes  "Hi!  Naked, Blond Russian Chicks crawling across the bed!  I'm glad you like my blog!"
Do you think the exclamation marks were too much?
And here's some breaking new!  Kathie Lee is leaving what ever the hell that morning shit show is she hosts.  It's a rather sad day in America when that headline gets as much attention as the "Chuck and Nancy Show," which premiered yesterday.  I didn't catch the entire episode, just a small clip where the Idiot Jerk kept repeating "Chuck, I need 10 votes.  You got to guarantee me 10 votes."  Of course Nancy kept interrupting with "We start with the White House."  She did that on purpose, you know, patiently goading the Idiot Jerk over and over again.  I'm sure his supporters must have been freaking out.  How could she treat this moral degenerate in such a way!  Didn't she know he was sent by Satan God?
And, of course, there were the private comments in which words like 'skunk' and 'tinkle' were bandied about.  How infuriating that must be for the Idiot Jerk, knowing men... and women (especially women) are laughing at him.  My money says he regretted skipping his daily session of Camp Paradise in order for him to guest on the "Chuck and Nancy show." 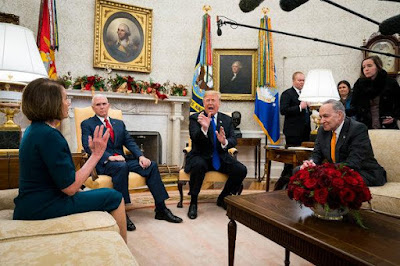 "See Chuck.  See Chuck smile.  Smile Chuck, smile."  Did you notice how Pence just sat there while Schumer sat there and smiled, not nodding, barely turning his head from side to side, like a statue?  Doesn't he remind of Norman Bates in the last scene of Psycho?  I didn't blow up the picture to check, but can anybody tell me if there's a fly on his nose.  Or maybe he too is thinking Camp Paradise would have been the better option.