Well, here it is Sunday morning.  I stopped taking the Mucinex at 0230 not because of any issues, rather my Dr said the torrential nasal drip symptom should be gone in about 4 days.  For the most part it is and now I'm left with that standard, run of the mill cold so many others get.  This viral infection thing?  I know 3 other people who have had it including my runner friend Steve who told me "it really knocked me out, I couldn't run for 7 days."  That's almost an eternity for him.
I saw a headline on my phone this AM from Faux News claiming Schumer was demanding the Idiot Jerk drop his wall.  Chuck did... back on 12/10.  That was before the American Freedom Caucus, soon to be a minority group, played hardball with the Idiot Jerk.  "Give your base the wall," they threatened, "or we will stop defending you against the Mueller Investigation."  Well, the Idiot Jerk popped a little turd, and then reneged on his word (something quite common), and the government was shut down.  We're getting to see their last gasping breath of racism before Democrats tell the members of the Freedom Caucus to do what they have been telling Democrats and Independents for years "shut up and sit down."  They know that in 10 days their wanna be Idiot Jerk dictator is going to pop another turd... actually, he's probably going to pop more than one.
On a much brighter note, if you haven't heard David Hogg is going to college!  Remember when Laura Ingraham mocked him on National TV because he'd gotten a few college rejections?  So David raised up his voice a speaking clearly and plainly to Laura's advertisers.  "I am a survivor of a mass shooting.  I have seen the violence of guns in the wrong hands and have waved a red flag.  Because of this she feels justified in mocking me, in trying to humiliate me on National TV."  Her advertisers looked down with disdain upon Laura and started pulling their advertising.  Faux News started popping little turds and sent Laura on a wee vacation.  When she returned, she apologized for her words, but not to David Hogg because she is too enraptured in her Conservative beliefs to ever understand.  Of course, Karma looked down and said "Laura, you're a phony blond, and a phony human being."  And then Karma looked down on David and smiled.  Karma balances everything by punishing and rewarding. 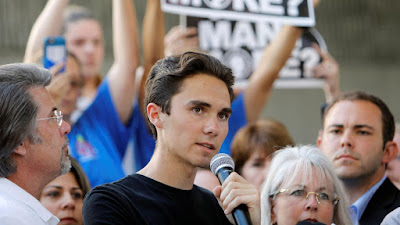 David Hogg is going to college.

David Hogg is going to Harvard.