Well, today is my... I guess you might want to say Friday, since I'm off tomorrow.  Of course I do get to work the next day, New Year's Eve (like I go to bed around 9:30 PM anyway), but then I have 3 days off in a row, which is the equivalent of a long weekend for a lot of you.
The HR position I did for almost 5 years opened at my store.  I did not apply, though a number of people did, two from the Flooring Department.  Neither got it.  One of them didn't want the job, the other, whom I'll call #2 did.  #2 is an older person who embellishes his work history.  He is a older and desperately trying to be important.  When I told this #2 they had announced the name of the applicant who got the job he said "(the store manager) had told him 'you were our best applicant until (so and so) threw her hat in the ring at the last minute.'"  Well, that's a lie.  #2 wasn't even in consideration... I know (ha ha) because, even though I am no longer a confidential person, people still confide in me.  There is going to be another supervisory position opening up in about 2-3 weeks and #2 thinks he's got a great shot at it.  He doesn't.  I do know who will get promoted.  Since I don't like #2 I would sincerely like to tell him he's going to crash and burn.  But I'm a nice guy, you know?  And I don't even need to tell management #2 is shit, they already know.
I saw where the TSA is going to change the breed of dogs they use from German Shepherds to a dog with 'floppy ears.'  Floppy eared dogs are less scary and come across as being much less aggressive.  This is true, I know, I have floppy eared dogs. 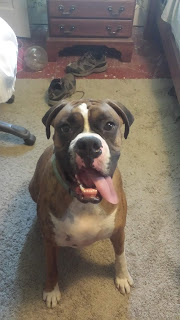 I don't know how other doctors work, but with the VA I always receive in the mail detailed information and diagnosis after every visit.  Yesterday I received the print out from my last visit, for my 'viral infection.'  The diagnosis:  Acute Viral Pharyngitis.  For those counting, this is day 12.  Just think, if it had been Strep they could have given me an antibiotic and everything would be cleared up by now.