A bit about benefits

Monday!  I'm off.  Originally I had read my schedule wrong and thought I had off 2 days, worked a day, and then had off again.  Turns out I have off a day, work 2 days, and then have off 2 more days.  Does that count as dyslexia?
Maybe that's what's wrong with the Republican party.  Even after a bruising midterms, they continue to go about as though nothing has happened, business as usual.  Do they see going from a majority of 23 to being the minority party by 39 / 40 seats as normal?  Or is there something twisted in their brains which lets them see that loss and still say "hey, we got this!"  I mean, they've always been great on denial and pointing fingers.  Of course, they are terrified to point those fingers at the Idiot Jerk in the White House - that would mean they've made a terrible mistake, that they're completely out of step with a majority of Americans.  Come to think of it, being out of step has never stopped them before.
So, I went on line last evening to order the dogs their Christmas toys.  Well, the first thing I saw at the top of Amazon's home page was an announcement about Aquaman.  Amazon Prime members could actually purchase tickets to see the movie a week before release.  That's right, while the rest of America waits until 12/21, those who have Amazon Prime get the chance to see it early.  So, of course, I bought tickets.  Now, I call that a really nice benefit. 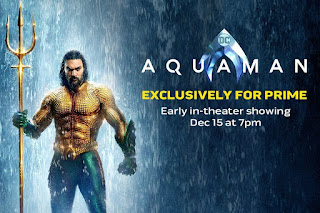 Finally, a bit about Met Life.  If you're my age, or there about, you will remember The Peanuts Gang and Snoopy.  They were unbelievably popular with daily cartoons in the paper and specials on TV.  The specials on TV were almost always sponsored by the Metropolitan Life Insurance Company.  Both of my parents bought Met Life insurance policies - it was the thing to do.  Well, now I'm dealing with Met Life.  They are greedy as hell.  I notified them on 11/16 of my Mom's death.  I was told they would mail me paperwork in 7-10 business days.  I notified them on Friday 11/30 that I still had not received the paperwork.  Their agent reminded me they had 7 - 10 business days "and there have been 2 weekends and a holiday since the 16th."  There agent then went on to tell me that once they receive the paperwork back, with the death certificate, they have another 7 - 10 business days before they have to mail out the check.  This means it could be over a month after I notified them that I receive the insurance check.  When I told her there might be people out there who might be in dire straits and might desperately need these funds, she said, "this is our policy."  In my opinion, this defines failure.  So, if you have annuities or polices with Met Life be forewarned, they will hold onto your funds with their tight little fists as long as possible.  They are not there to provide a benefit.