Okay, sometime today, or this evening, Flo is going to make landfall.  Torrential rains are forecast.  Because she's a bitch, she might just choose to sit on her ass for a couple of days and piss all over the Carolinas.  I'm not talking buckets here, I'm talking feet.  If you're in a low lying region, run for the hills, literally.  Getting hit by a wall of moving water is just like running headfirst into a wall of bricks.
Oh, and the guy from FEMA says they only gave $10 million to ICE.
On a lighter note, Betsy DeVos got a boot up her ass.  Where as the Obama administration had a problem with predatory schools, Betsy doesn't.  She doesn't see anything wrong with a school that lies to you, makes phony promises, and fakes statistical records in order to sign you up for high interest loan.  To Betsy, that's just American Capitalism.  Her government should not have to police these scavengers.  If you sign on that dotted line, then you, and you alone, are responsible for the financial wreckage that loan will cost.  Except 18 states, plus the District of Columbia, sued ol' Betsy, and a Federal Judge said they were right and she was wrong.  So far there's been no comment from the Department of Education.  No doubt Betsy doesn't know how to respond to someone telling her to "just shut up."
On the even funnier side of things, articles are beginning to pop up about the mid-terms.  Conservative political pundits are scratching their heads.  They don't understand how, with the economy this good, so many can hate the Idiot Jerk in the White House.  His approval rating has dropped to 39.9 - that's really terrible, especially with an economy that's this good.  These conservatives believe if you're making money, you should be happy with any scumbag sitting in the Oval Office.  They don't understand why people don't say "well, so what if he's a reprehensible dick, I'm making money."  And they are muttering about the up coming elections, about how that non-Hispanic Ted Cruz is struggling against that Irish guy Beto O'Rourke, (don't let the last name fool you, Beto is proud of his Hispanic heritage).  I saw one article in which the suggestion was made that Beto must be surging in the polls because he was more photogenic than Ted... 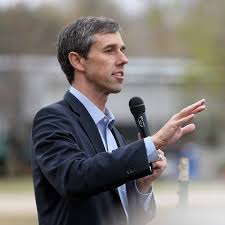 These people are so fucking stupid.  Their tones are low as they discuss other Senate races, the ones they thought of as sure things.  What did they think was going to happen?  Did they really think a majority of the American People were just going to sit back and swallow their shit?  And instead of dealing with the problem, they're looking for photogenic excuses.