A Little Court Intrigue anybody?

Friday is Funday and Humpday for me!
As I write this, Biggie is laying by my side.  He usually does this in the mornings after his breakfast.  Lily prefers the sofa in the living room downstairs.  She likes looking out the window and has managed to nap with one eye shut, the other one open, scouring the front yard for a wayward bunny.  I live in bunny hell.  In a few minutes she will spy one and begin to bark, and Biggie will race down the stairs, and shortly after that, I'll head down to open the back door so they can both go out and bark and the bunny.
And, of course, the Idiot Jerk in the White House is a tad upset because the NYT published an anonymous Op-Ed... badly.  This so reminds me of the Court Intrigue from days of yore.  While not nearly as bloody as with Henry V, this has nearly all the same earmarks.  Rather than using swords, and knives, and poison, in this Administration they're using words.  Could the culprit be Sir Penceiful?  He desperately wants the job.  You can bet he's realized that the longer the Idiot Jerk stays in power, the less likely that is going to happen.  The BBC seems to think he might be the author.  Might that not be his rapier piercing the Idiot Jerk's back?
Unfortunately, there are so many villains.  From Sister Sarah, a novitiate from the Holy Order of Liars, to Nanny Niki, who just might be tired of nursing the Idiot Jerk's failures on the world stage.  Let's be honest here, the Idiot Jerk's dance card is filled with names of people who are simply dying (figuratively) to dance him into history.  We have Lord Mnuchin, whose blonde, bimbolina wife is fervently egging him on, "Stick in in, Stevie.  Stick it in! (I'm talking about the knife, here).  There's Friar Giuliani, who has so many sharp and phony syllogisms tucked up into his robe he can't keep them from falling out every time he turns, and Lord Larry of the Kudlows, who can't stop whispering "this fool's giving me another heart attack."  And we haven't even gotten to the tip of the iceberg yet. 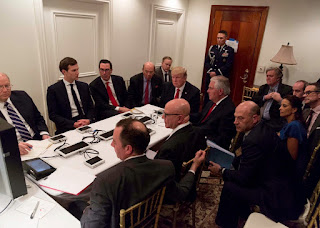 There have even been rumors that Kellyann might be the author...  Nah, I made that up.  She has no idea that a complete sentence is, so how could she write anything.
Posted by Dave R at 6:47 AM