A lot of you know I was in the Navy a long, long time ago.  I'm a member of several groups on Facebook, one being The Tonkin Gulf Yacht Club.  Another one was set up by one of my friends for members of OI Division on the USS Constellation.  I know people in both groups.  However, the OI division group posts pictures of us... some 40 odd years ago.  This one was posted yesterday.  I know a lot of you are wondering which one of these handsome young men is me.  I'll give you a hint.  I am the oldest one in the picture.  A fact I am reminded of every time my birthday is announced on Facebook. 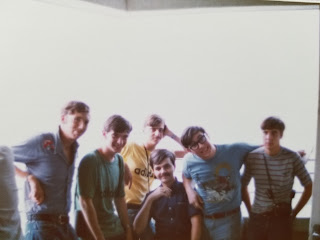 While those were serious times, cruising up and down the Tonkin Gulf as we launched air strikes, we had the easy jobs.  Those guys on the ground?  They were fighting to stay alive.  This is apparently something a lot of crazy conservatives seem to have forgotten.
And what about the 'anonymous op-ed' in the NYT.  I guess the Idiot Jerk in the White House is going ballistic.  For years his legal teams have been smacking the shit out of anybody who cried foul, who tried to get a fair deal.  The Idiot Jerk had no compunction when it came to ruining people's lives.  He believed, and still does, their value is severely limited.  Now he is learning people have very little compunction when it comes to his life.  They mock and deride his every Tweet.  His supporters are seen as human failures, desperately grasping for as much power as their brittle, little fingers can clench.  No matter which way they turn, they find themselves mocked as much as their president.  If, perhaps, they managed to demonstrate just a smidgen of accountability, but we all know they shit that away years ago.  So, what did they think was going to happen?
Anyway, for those interested, I'm the one wearing the green Adidas T-shirt.  And, what I find funny as hell, everybody in that pictures is younger than me.  That's right, I'm the old man.