Out with the Old, In with the New

Well, it's Labor Day.  This is a National Holiday here in the United States.  Supposedly a day to celebrate the accomplishments of Americans, most just see this as a paid holiday.  For the first time in almost 10 years, I don't have to work, which is nice.  That doesn't mean I haven't been doing anything.  Rather, the opposite has been happening.  Besides my normal household chores, I have myself a little project: remove and replace the silicone caulk in my walk-in shower.  I used a tool (which we sell), and a spray on solution (which we also sell.)  Well, the tool, which is plastic, broke, and the spray on solution?  Way too thick to actually spray.  I poured it into a small Tupperware container and used an old toothbrush as an applicator.  The softening process took much longer than the instructions implied.  Removal also required much more elbow grease than was suggested.  In the end, however, all of the old caulk is gone, replaced by new, longer lasting caulk.
As I was laying in bed this morning, I heard on the news that the DeSantis campaign is outraged that a white supremacist group was making robocalls on his behalf.  Can you hear me laughing.  Checking on line, I saw that 'all white' Faux News was coming to his defense...  Can you hear me laughing?  Kelly Wright, their only black anchor is suing them for racial discrimination.  Oh, wait, is he still with Faux News?  There is also Harris Faulkner.  She has a show called Outnumbered.  She's married to this dude Tony Berlin.  At one time he worked for Good Morning America.  He is one of those Crazy Christians, which makes me suspect they are both paddling around in the same canoe.
That gives us two black people.  Don't even try and compare Faux News to any of the other cable news networks, you'll end up breaking a gut laughing.  Faux News is desperately clinging to a history that is disappearing through evolution.  As if we didn't know that already.
The temps outside are supposed to be stinky hot.  Right now the plan is to stay inside when I can enjoy the air conditioned comfort. 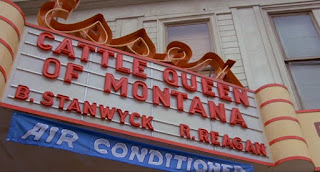 Now, I'll be the idea of getting to see an old Ronald Reagan movie will some of you so hot you'll need to pull out your fans.