Here it is, Tuesday, my 2nd day off and the rain has not stopped.  Oh, yeah,  it's only a drizzle right now... but then it was only a drizzle most of yesterday... and it's supposed to be only a drizzle until sometime Thursday.  Oh, and don't think Thursday's supposed be clear and sunny.  No way, the forecast is for heavy clouds and high humidity... and then it starts to rain... again.  The eastern seaboard of the United States is turning into a rain forest, no doubt the result of global warming.
I had to email a copy of my POA for my Mom to Pinnacle Health yesterday so I could get her billing address changed.  They mailed a $1750 bill for her last hospital vacation to her senior living address - I got page 2... yep, only page 2.  That's pretty good when you take into account she's 85 and has dementia.
"Fear" comes out today.  For those who don't know (?) "Fear" is a tidy, little expose by a gent named Bob Woodward who has made quite a career of gathering nuggets of truth about presidents and their administrations.  He provided tasty morsels on George W which provided much insight into how a feeble minded, Crazy Christian struggles to survive.  Yeah, that's the tome in which W says he "talks to his higher Father."  Oops.  Of course, we know the Idiot Jerk has no 'higher Father.'  There is no one being in the known (and unknown) universe who is smarter than he, which is why Crazy Christians love him so much.  He has become their surrogate deity.
Today we honor those who died during the attack on the World Trade Center.  Many died in those attacks.  Many, many more died afterwards in a war 'W' chose to wage against a poor, Muslim country.  None of those attackers came from Iraq.  Fifteen of them came from Saudi Arabia, a very wealthy Muslim country, which, interestingly enough, is not part of the Idiot Jerk's travel ban.  When money talks, the Idiot Jerk listens.  Think of him as this fat, ugly pole dancer with orange/yellow plastic hair.  Your average Joe watching him might get a jiggle of cellulose, he only rolls down his G-string for the big tippers, like those high rolling, Saudi princes and kings.


PICTURE OF IDIOT JERK IN A G-STRING CENSORED

On a lighter note, I did buy 2 new throw rugs for the dining room.  Originally priced at $99 each, I bought them when they went on clearance:  $25.03 each. 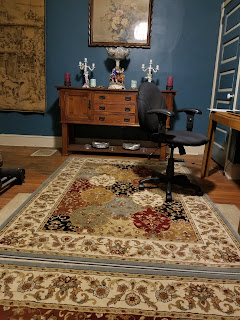 The pattern is a bit unattractive, but the quality is fairly good.  At that price they're throw-a-ways, good for maybe 3 or 4 years (big dogs, you know).  They're nice, though I will admit the color palette in the center is not one I'd have chosen:  black, and red, and gold, and grey, and some sort of off taupe color.  Still, a deal's a deal.