Ho Ho Ho and beyond

Well, here it is Wednesday which is sort of my hump day since I work on Saturday.  Of course, I'm off then until next Wednesday.  The temptation is there to all off on Saturday.  I'm hoping I'll be strong.... hoping.
I've been pondering the idea of stepping down from my Specialist position.  Right now sales goals are set.  I need to sell so many $'s to meet my goal.  Some weeks I surpass my goal, others I don't.  There's very little praise when I do but always a 'friendly' conversation when that goal isn't reached.
E3 is over.  Bethesda announced some really good games, but their Fallout 76, an online MMO failed to excite me.  There's no offline, single player mode.  This means every 'human' character you see will be another person playing the game.  Sometimes these players can be fun, but then they can also be 12 year old asswipes.
Ubisoft has a new Assassin's Creed coming out.  Odyssey, like in Homer's Odyssey.  And it takes place in the Greek Peloponnese during Greece's Golden Age.  You get to play as a Spartan, either male or female.  This is now a full blown RPG which includes crafting... and romance... with either gender.  One commentator said this is similar to the Role Playing Games Bioware put out before they were bought by Electronic Arts.  As you might guess, I've already pre-ordered.


And speaking politically, I got a real chuckle this AM while perusing Bloomberg.  There was a lengthy article about how the real winner from the meeting of the Idiot Jerk and Kim Sum Dumb was... China.  Didn't I already say that?  Oh, and there was another article about the North Korean propaganda machine and the version they are putting out.  Evidently, the Idiot Jerk sat down with Kim Sum Dumb because North Korea is now equal in its nuclear capabilities to the United States.   So tell me, do you really thing they're going to give up their nuclear weapons?  Make themselves weaker than the US?  This whole thing is going beyond Ho Ho Ho, and not in a good way.
As for me, now I'm looking forward to running around Greece looking like Alexios. 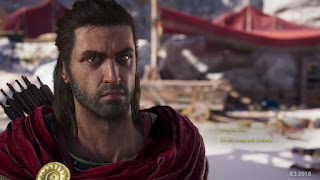