Well, it's Friday and I get to go back to work.  Six days from today begins a 5 day vacation, not that I'm going anywhere - too much to do here.
Yesterday was shitty rainy - in fact the next couple of days we're going to have the same weather pattern.
I went to see my Mom yesterday.  I took pound cake, I usually take a snack.  We weren't really talking about anything in particular when she said "I have to tell you something.  I had a visitor.  A man.  I met him when I was back in jail.  He was a nice guy who wanted to be an attorney, and that's what he did when he got out of jail."  Of course, my Mom has never been in jail, never even been close to one.  I just sat there and said "really."  I say that a lot.  She's not going to improve... at all.  This is how it goes with some people.
There was a bluebird in my yard yesterday.  Evidently this is a very good sign for me.  I took a picture of him that does him very little justice, though he might actually be a her and not a he. 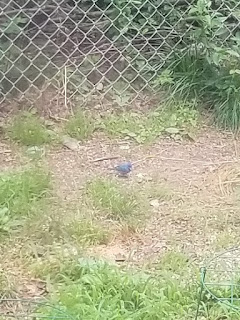 He walked around and pecked things off the ground.  I have no idea how long he was there.  Eventually I had to let the dogs out and he flew away.
I also downloaded the first game on my new PS4 Pro, the very popular God of War.  An action / adventure game, you play as Kratos.  This will explain who he is a lot better than I can.  It also means I get to look like this.

Oh, and in case nobody has told you, we're having a Trade War.  The Conservatives are doing their 'yippee, skippy' dance without so much as a glimmer of a clue as to what this will do to the economy.  But then they've always been stupid as hell when it comes to the economy.  As  the Idiot Jerk in the White House starts down another path towards bankruptcy, he totally doesn't get that this time he's going to take the country with him.  Gas is already up to $3 a gallon here.  Now everything else is going to go up in price, too.  His supporters are going to start shitting bricks when they realize the rising cost of aluminum will make their 6 packs of Schlitz go up in price.  Woe is me.