Well, it's Wednesday and I get to go back to work for 4 days.  I have 2 weeks of 32 hours, a week of 40 (over the 4th), and then 2 more weeks of 32.
There's going to be a lifestyle change around here.  They called me from the store yesterday and left a message, said there was something important they needed to talk to me about.  So I called back.  One of my fellow specialists, after repeated warnings, was fired, chose to seek employment elsewhere.  His earlier shift is now available and they asked if I wanted it.  I said "yes."  For the first time in 9 years I will once again be working an 8 - 5 shift (well 4:30 to be precise).  Of course this will mean changes to my workout schedule, to my riding schedule, to my movie going schedule.  I will have to write the blog at a different time since in 3 weeks I will have already been a work for a bit.  The dogs will have to adjust, but not much.  Like most dogs, they like to sleep a bit.
My glasses broke last evening while I was watching a video.  They're rimless.  There is, however, a fine string, like fishing line, holding the lens in place... and it broke, and the lens fell down on my chest.  I have 2 other pair, so I'm not concerned.
Evidently quite a few Evangelicals are having a "Dear Jesus" moment.  They are discovering in a very ugly way that the Idiot Jerk in the White House is... a scumbag.  And here they were telling themselves he was actually 'born again.'  You see his zero tolerance with immigrants and their children makes them look... BAAAADDDD.  This is the price they pay for giving him their support.  Didn't anybody tell them there's a price for everything.  I believe it was Robert Heinlein who said "There Ain't No Such Thing As A Free Lunch."
And after about 3 weeks of playing God of War I bought a new game this AM  Vampyr.  You play as... a vampire.  I'm hoping this will be fun.  God of War was fun, at first.  Combat got tedious.  You have an ax.  Upgrading the ax means pressing a different set of buttons.  Every upgrade requires a different sequence.  The upgrades, themselves, become corny after a while.  So, I decided to give up the ax and start biting people in the neck.  Oh, and not only to I get to be a vampire, I get to be a doctor in 18th century London. 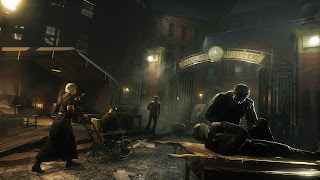