Sunday, my last day of work for a while.
Tonight is Bethesda's E3 showcase, starting at 9:30 PM EST.  I'll be watching.  I'm also a bit leery.  There are a lot of so called leaks out there saying their next AAA game, Fallout 76, is going to be an MMO, (that's Massive Multiplayer Online).  I don't play MMO's, single player only.  None of my friends play MMO's.  Sadly, mulitplayer games make a lot of money and, unfortunately, game publishes tend to go where the money is.  So far Bethesda Game Works has bucked this trend - let's hope they continue.
Oh.... and all that G6 bullshit?  I looked at that picture Merkel tweeted of the Idiot Jerk sitting there like an obstinate prick and thought... 'this is exactly what he wants.'  He is the star of the show.  He is creating the disruption Putin wants so much, the Idiot Fool who will burn so many bridges out of stupidity.  He is the Idiot Jerk who has failed to learn a single thing from his four bankruptcies.  As for our Allies?  They are learning what it feels like to be a contractor on one of the Idiot Jerk's projects.  He will stab them in the back when ever he gets the chance.  Sad to say, his supporters actually believe he's standing up to the evil Canadians.  Shit!  I can't believe I just wrote that.  It made me laugh.  I mean, those Evil Canadians!   How long will we have to wait until he starts talking about building a wall between the United States and Canada to keep out those Evil Canadian illegal aliens?  And, of course, he has John Bolton on side which means every Allie is an enemy.
How more absurd can this get?  Well, in 2 days he's going to be meeting with Kim Jon Dumb for a repartee of Big Macs and Diet Cokes.  Sadly, for the Idiot Jerk, Kim Jon Dumb isn't that dumb, in fact, he will probably play the Idiot Jerk as the Fool of the Century (and the century is not that old).  Who is going to come out of that meeting smelling like roses?  Kim, because he wrangled the Idiot Jerk into meeting with him in the first place.  And if things go well between the two?  Well, jumping Jehoshaphat, isn't he the kind of Allie we want on our side.  He'd be so much better than those Evil Canadians. 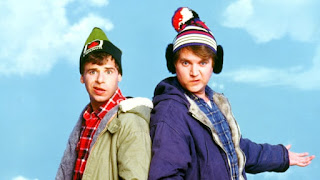 No doubt the Idiot Jerk found a live mouse in his Diet Coke.
Posted by Dave R at 8:00 AM