For those of you who don't know it, and few there are, next week is Thanksgiving, at least here in the US.  Traditionally everybody eats turkey and watches football.  Traditionally, the next day, being a Friday, and marking the first day of the holiday shopping season, became known as Black Friday.  This is the day when retailers moved from the red side of their balance sheets to the black side.  This is the day when sales galore brought out shoppers by the millions.  This is the day which a number of companies started giving their associates as the 2nd part of their Thanksgiving Holiday.  Sad to say, but every year Black Friday becomes a little more gray.  One financial analyst blamed this on the growing popularity of Cyber Monday, that day when Internet sales trump those of brick and mortar stores.   That may be a portion of the graying, but not a major one, not yet at least.  No, the biggest reason for the changes in shade from dark to light has more to do with American Greed. 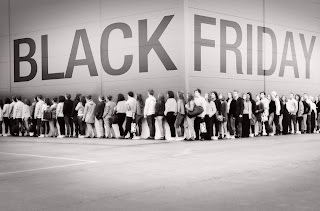 First it was Walmart opening late Thanksgiving day, and then Sears / Kmart jumped on the bandwagon.  The rational being "shit, if they're going to make money, we might as well too," and "hell, why should they rake in all the dough!"  Screw the holiday, they all wanted to get a jump on the competition.  Every year more retailers jump on board simply because if those customers spend all of their money at Target, and Walmart, and Toys-R-Us, they're not going to have any left to spend in your store.  Or, if they do keep a little aside it's most likely going to be for stocking stuffer bullshit, that inferior nickel and dime crap retailers put out simply because it's a dirt cheap deal.  Thanks to Sears Brand Central, if you're a brick and mortar store which sells appliances you're a day late and a dollar short, either that or you take a big hit on those $2000 dollar refrigerator and stoves.

There are a lot of people out there who really hate this commercialization of Thanksgiving.  As someone who work in retail, let me tell you a secret.  If you're open, people will shop.  Every year I hear a lot of moaning groaning because the Christmas stuff is up right after Labor Day and every year I see customers walking out the door with their newly purchased Christmas crap.  If it's for sale, people will buy it.  For those who don't understand it, this is American Capitalism.  Remember, it's all about making money - holidays be damned.
Posted by Dave R at 7:29 PM