Rain is in the forecast for today.  Temps will reach the mid 60s (F) and then begin to drop. We will be chilly for the rest of the week.  That's fine.  I will turn the heat back on probably since highs are only supposed to be in the mid 50s (F).  That's cool.

Yesterday was busy.  Lawn got mowed.  2.20 miles on the treadmill.  Olive oil cake baked.  As well as the garbage being taken to the curb, several other things made it there as well, including a very old shop vac.  As usual, the pickers passed down the street overnight and many of the 'other things' were moved from the curb to the backs of pickup trucks.  Except for the shop vac.  Someone took the top vacuum section and left the bottom cannister section.  Very Interesting.

Here's a picture of the cake.  I skipped the lemon and added ricotta cheese, dried cherries, and almond extract.  It's tasty, but I should have used cream cheese rather than the ricotta, which made it overly moist. 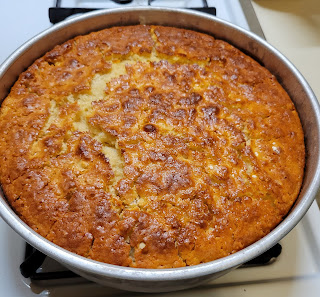 The Republican candidates for Pennsylvania senator held a debate last evening.  Two things were apparent: 1. all 5 of them believe attacking the other candidates was more important than talking about either credentials or policy; 2 now is not the time to move on from the 2020 presidential election, though McCormack did say Biden is the problem.  Evidently Oz frequently mentioned he Trump's endorsement.  He was also the one most vehement about Trump losing Pennsylvania, so I'm guessing he had to bow down before Trump and swear eternal allegiance to The Big Lie in order to get that endorsement.
And, finally, yesterday Ron DeSantis signed a bill creating an 'election police force,' meant to ensure the integrity of elections. I don't doubt for a second that this is the Republican equivalent of the Gestapo.  You see, Ronnie wants to run for president in 2024, however his chances of success would be far less likely if he loses in his run up for a 2nd term as governor.  His every action has one purpose, to unite the Republican base in Florida.  To do that he has attacked Disney's Right of Free Speech, calling the woke.  He has also eliminated the voices of 2 voting districts whose majority was black.  He is going to do everything within his power to keep minorities away from the polls.  You see, he believes that is the only way he can win.  Prepare yourselves for The Big Lie (part 2) when he loses.