Okay, so instead of going to the movies last evening, I went to see Elton John in Hershey, about 15 miles away.  This is the continuation of his Farewell Yellow Brick Road Tour.  The tickets were bought over 2 years ago - then along came Covid and then the show was postponed, and the wait began.  The show was sold out, however the 2 seats to our right were 'no shows' so we had some spreading room.  Arena seating is not known for either comfort or space.   Remember, clicking on the pictures will embiggen them. 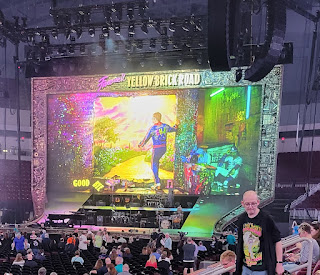 About 5 minutes before the show, the camera guy showed up. 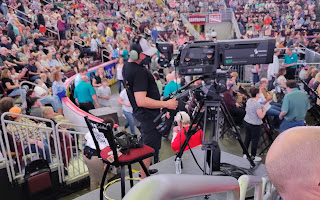 And then, of course, with the intro for Pinball Wizard playing loudly, Elton arrived.

For a 75 year old man he still has a lot of gusto.  His set-list is most of his hits, but not all, there was no Honky Cat, no Daniel.  Instead, we got to hear other, better songs like Burn Down the Mission, and Have Mercy on the Criminal, songs that were never FM radio popular. 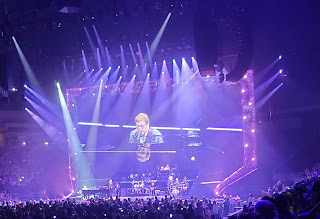 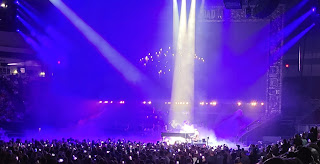 And there it is, a nice pictorial post for today.  Tomorrow?  I'm probably going to unload on DeSantis, now won't that be fun!
Posted by Dave R at 8:37 AM