So, it's another chilly day outside, meaning the temperature is sitting at a cool 18 (F).  Things are supposed to warm up, though.  By this afternoon we're supposed to be in either the high 30's or the low 40's.  I'd prefer the latter since I have to clean up al those little frozen gifts the dogs have left for me in the yard.  Right now every poop, big or little, is frozen to the ground.

I don't really have a lot planned for today: a ride on the bike, working on the rewrite.  I've been spending a lot of time on the latter.  Changes always happen at this stage.  One thing that is constant is the word count increases.  Sentences, and even paragraphs, get added to the story in order to clarify certain points.  In the next chapter L'Oof Porte, an upscale restaurant in the Garden District, will be getting a face lift.

Bread was baked yesterday, here's a picture since John wanted to see it.  And what did I do with that bread?  Well, for dinner I made French Toast.  So, here's the bread. 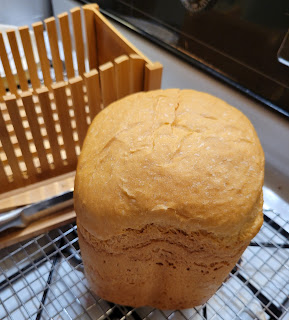 And here's the toast. 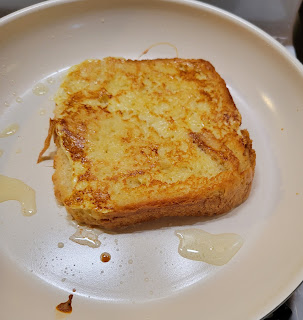 It was scrumptious but had way too many calories.
And Trump called out 'gutless' politicians who are too cowardly to tell people they've gotten a booster.  So, who's he gunning for?  DeSantis?  Rand Paul?  He said this on OAN, a Cracker Jack Crazy Conservative outlet.  He also said that the vaccines have saved tens of millions of lives.  That horrific sucking noise you're hearing?  That's the sound of Republicans being forced to pull their heads out of their asses.  Wow, I'll bet that hurts!