The Big Lie... again, and again

Well, it's Friday, a none work day for me.  That's right.  I am unavailable to be scheduled on Fridays.  The same is true for Tuesdays and Wednesdays.  At some point, I will add another day in order to have four days off per week.

Being off today is a good thing since we had snow last night.  Not much, around 4 inches, meaning I'll have to do some shoveling later.  And later, since I have the ingredients, I'll make some chicken soup, they say it's good for the soul.  I don't really think that's true, but it is tasty. 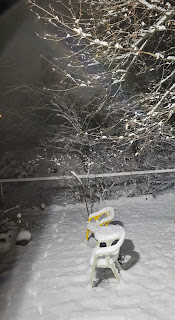 Wasn't that a great speech by Biden yesterday?  I was working, so I didn't get the chance to see it in its entirety.  It did piss off a lot of Republicans.  Just as many confederates never got over losing the Civil War, they will never come to terms with Trumps defeat.  Their policies, their beliefs, all were rejected by over 7 million Americans.  And what did Trump do?  Spit out the only thing Republicans can believe in: The Big Lie.  Of course, politicized Evangelicals have believe it, to do otherwise might indicate that God doesn't have Trump's back, and if that were the case... welll... oh.... shit!  Their desperation might have caused them to make a really big mistake.
And I understand Ted Cruz was on Tucker Carlson last evening.  Evidently Carlson dropped his drawers and turned around in order for Cruz to obligingly kiss his ass.  One comment I saw hit the nail of truth right on the head:  Cruz is more concerned about Carlson's opinion then he is the opinions of his constituents.  Cruz doesn't understand the minute he flew to Cancun last year, he wrote his own ticket out of Congress and no amount of kissing Carlson's ass is going to save him.
Mid-Terms are coming up.  Vote Blue to save America.