The difference between Covid and the Flu

And so we begin Sunday, the quiet day.  Almost as if knowing this is a day of rest for some religions, Mother Nature has bestowed upon Central Pennsylvania freezing rain.  Forecasts predict up to a quarter of an inch.  This is her way of saying "stay at home, don't go anywhere."  Will people listen?  Many will, but there is always that group of dummies who will get in their cars and drive to MacDonald's for breakfast.  These people with unfettered brains will be the death of themselves, and possibly others as well.

I'm scheduled to work from 3 PM to 7 PM, if I look out the window and there's a glaze on the sidewalk, I'll probably take some personal time.  "Better safe than sorry," I say.

I took this pic of the dogs yesterday.  Doesn't it look like they've just finished reprimanding me?  Of course, all I have to do is say "biscuit" and it's smiles all around. 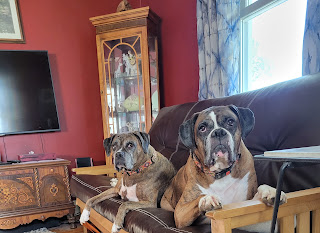 And, of course, there was a large Twitter storm yesterday concerning Neil Gorsuch's verbal faux pas.  People were outraged that while questioning OSHA's interpretation of Biden's mask mandate he said "hundreds of thousands of people die every year from the flu."  At least that, or something very similar, is what the transcript listed as his statement.  However, the transcript interpreted him incorrectly.  The transcript missed a comma.  He actually said, if you listen to the recording, "hundreds, thousands of people die every year from the flu," and OSHA doesn't regulate that.  Personally, his actual comment is far more damning since he's comparing well over 800,000 deaths to "hundreds, thousands."  This is the type of thinking we have come to expect from Cracker Jack Crazy Conservatives.