Slept in again this morning , and not because I stayed up late.  When the alarm clock went off this morning, I simply turned it off and rolled over.  This is getting to be a bad habit, I think.  Perhaps I'm going through the winter doldrums.

The temps might warm up into the mid-30's next week.  This winter is colder than the last two.  The snow and ice are non-relenting.  The roads and sidewalks are clear, but crunchy, crusty, icy snow covers everything else.

My upstairs desk chair broke.  The seat no longer stays at the height I want, sinking as low as it can go within in few minutes after I sit down.  It's a gaming chair and a lot of gamers like sitting low to the ground, I don't.  That's one of the reasons I drive an SUV, so my ass isn't riding a foot above the road.  This means the search will soon begin for a new desk chair.

The Body in Repose is over half complete. The rewrite is going in fast. This is what it looks like, in case any of you are wondering.  So, how important do you think the sentence, 'Bobby sat back in his chair and popped the top of another Anchor Beer,' is to the story?  Hhhmmm 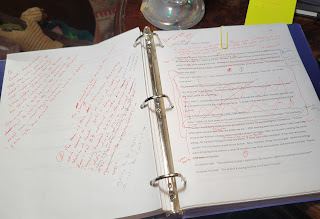 I saw where Ivanka Danka has been asked to testify before the January 6 committee.  I'm wondering how much dirt they have on her that they can afford to 'ask.'  Will she comply and turn the screws on her father?  Well, let's be honest, she's a Trump so the only ass she's worried about is her own.
Finally, there's a lot of buzzy buzz going around that Clarence (my skin's only dark because of the bad lighting) Thomas was the only judge to vote against releasing Trump's communications from January 6 because his wife Ginni's name is going to figure prominently.  For those who don't know, Ginni (my lighting is so much better than Clarence's) is an Evangelical  Conservative Activist.  One of the things I find interesting about the couple is that even though they've been married since 1987, they have no naturally born children, nor have they adopted any children, unlike Amy Coney Boney Barrett.