When to cut blinds

Welcome to Sunday.  The weather is supposed to be nice, so we'll be expecting crowds at the store.  Yesterday our  parking lot was jam-packed.  And, I had one of the dumbest customers I've ever had in my life.  Everyone I tell starts to laugh.  Me?  I'm still laughing.  I get a page to help a customer in blinds, a middle-aged woman and her husband are standing in front of the cellular display.  She tells me they want to buy one that's a Parchment color, a big one.  She pointed to one that was 6 feet long and proceeded say she wanted it cut in half so they can have 2 blinds.  I told her we didn't do that.  She started growing irritated and pointed to the blind cutter, "what's that for?"  I explained how the cutter was used to take a little bit of the ends of blinds so they could fit in different sized windows.  I also told her we didn't sell extra mounting hardware.  Her response:  "I never heard of anything so damn stupid."  I also told her the blinds wouldn't work because cutting it in half would destroy the pulley mechanism running across the top of the head rail.  She flipped.  "Pulley mechanism!  Why the hell is there a pulley mechanism if these are cordless blinds!"  Surprisingly, she wasn't wearing a MAGA hat.  Now tell me, have you ever considered cutting a blind in half to get two?
Of course, a lot of people are talking about Obama's commencement address.  He is infuriating both the Idiot Jerk in the White House and his minions because Obama, unlike the Idiot Jerk, sounds intelligent when he speaks.  He doesn't say things like "super duper missile," and "it's a really, really big white boat...  a really big white boat."  But then, of course, Obama understands that most Americans, except for MAGA heads, do not need things repeated for them to know what he's talking about.
Finally, my roses have started blooming and my peonies are preparing to pop.  Here's a pic of Biggie the other day.  You can see just a bit of the purply thing next to my yellow rose bush. 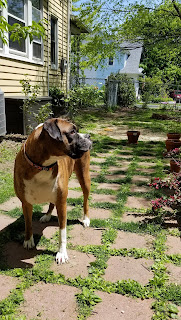