Okay, so the Memorial Day Weekend is officially over, that means "you go back to work. And you go back to work.  And you go back to..." Oops, sorry, for a moment there I started channeling Oprah.  I know you can't all go back to work, there's a killer virus out there.
Well, yesterday I didn't mow the lawn, as I had intended.  Nope.  I sat around, both inside and out. I rode 8.8 miles in Gascony through fields of sunflowers.  There were lots of hills.  I got my wattage up to 340 at one point.  I roasted a ham and today I'm going to use some of it to make baked beans.  I have the time because today I don't go back to work, that happens tomorrow.  Five days in a row.  Forty hours.
I took my BP this morning and it was a bit edgy.  Genetics, you know?  Everyone in my family has edgy BP... well, not all of us.  Some of them have high BP.  It's all part of the aging process.  Nothing's going to keep the flexibility in your blood vessels forever.
The Idiot Jerk in the White House shut down arrivals from Brazil.  Originally the ban was supposed to go into effect tomorrow however some smart cracker must have made it into his administration and realized this was deja vu:  been there, done that, waited too long on the travel restrictions with China.  Odds are they waited too long... again and a lot of new infections have arrived in our southern states.
And I got a big chuckle from the Idiot Jerk threatening to pull the RNC convention from Charlotte.  Remember, he's a numbers guy.  He loves his crows of worshipers.  He wants to pack them into the convention center!  A full house all around.  Charlotte, however, is saying "not so fast, social distancing is important."  Of course, that's grating his ego, it needs to feed on the adoration of an enormous audience.  What makes this even funnier is that Charlotte was the only city to really put in a bid to hold the convention.  A spokesperson for the RNC said there were actually 7 cities, however the reality is they asked several other cities... not takers.  Not even Las Vegas.  They're not a very popular crowd.
And finally, not all of my roses are big and showy.  I have this little wild rose which took root at the front corner of my house a few years ago.  Rather than rip it out, I decided to let it grow.  Both the flowers and the perfume are quite delicate. 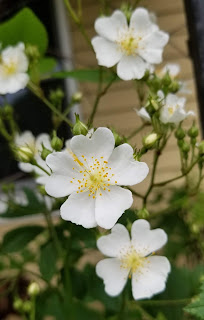 ATTENTION:  ALL COMMENTS POSTED PRIOR TO 1200 WERE DELETED BY ACCIDENT.