I slept with a menagerie last night, 2 dogs, a duck and a T-Rex.  I have about 1/3 of the bed. the dogs had about 3/6 leaving the only 1/6 of a queen sized mattress for the duck and the T-Rex.  They're small.  They don't take up that much space.
On my learning Greek:  I'm thinking of adding Pimsleur to the mix.  The Rosetta Stone has issues mostly because Greek letters are written differently.  I've already bought a book to learn how to write them correctly since they have different sounds.  Example:  a 'v' in English, or French, or Spanish has a sound we recognize in the words valley, or volley, or victim.  In Greek it sounds like 'n,' as in Nancy, or new, or nasty.  Another one is 'p' which sounds like 'r', so pain actually sounds like rain, though the 'ai' diphthong sounds different.  It's not as confusing as it sounds, I just have to retrain my brain.
Texas started opening up yesterday, even though they had their highest infection rate on record.  Remember, for Republicans, this is not about human life at all, rather they are focused on the only thing which might get the Idiot Jerk re-elected... the economy.  And it's not going to work.  In fact, it's going to fail them miserably.  Some of their politicians already know this.
America as a whole wants to reopen very slowly, Americans want to be cautiously careful.  Because of this those little, fat, white men with gun protests are backfiring.  Sure, they may warm the cockles of the Idiot Jerk's dark, little heart but Independent Voters?  They're shaking their heads in disgust.  They are not about to fall in with a crowd of MAGA headed rabble rousers.
Oh, and there's a new Press Secretary lying to the press: Kayleigh McEnany.  One of the first things she said was that she wasn't going to lie (they still laughing about that one) before proceeding to lie.  In case you didn't see her, here she is... another bottle blond with a fake tan.  This is what the Idiot Jerk believes America wants to see in his spokesperson... a Penthouse model. 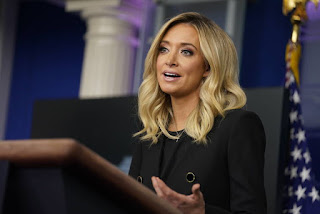 I'm sure both Kayleigh and he have a lot in common... and I don't just mean the tanning salon.   Though I'm sure it's not the same commonality he had with Sarah Huckabee (whatever her name was).  I'm sure his and Sarah's most creative moments came while they were pounding down Big Macs in the Oval office.