Oh my, one nice thing about wearing face masks in public is that they hide the fact that you might have a little booger hanging out of one of your nostrils.  You know what I'm talking about, that little thing people try not to stare at, all the while failing to mention you've got some little green guy waving at them.
Oh my, Tara Reade's details have gone porno in an interview with Megyn (sp) Kelly.  She wants Biden to be held accountable and get out of the presidential race.  She now has legal representation, some cat by the name of Wigdor who donated $55,000 to the Idiot Jerk in 2016.  He also represented Harvey Weinstein.  Where the hell is Gloria Allred when you need her?
Oh my, evidently the Idiot Jerk's valet, the one who serves him most of his meals, has tested positive for Covid - 19.  Can we talk about a shit show here.  I like the bit where he's described as being 'lava level angry.'  I'm betting he threw things, and broke things all while screaming at the top of his lungs.  Imagine a 2 year-old throwing the worst tantrum in the world... that's the Idiot Jerk.  Of course, he and Pence were tested.  I wonder, did anyone tell him it may take several days after you're infected for the test to prove positive.
Oh my, there's a Twitter war between Crater Face Mnunchin and Axl Rose which errupted after the Idiot Jerk used the G&R version of  Live and Let Die" when he turned a face mask factory.  It's all over the Internet, I chose the Tiimes of Israel version.  Evidently Crater Face posted a pic of the Libyan flat rather then the American flag in their dispute about patriotism.  He deleted the Tweet after he was told of his stupidity, but not before Axl smacked his shit down and made a fool of him for the world to see.
Oh my, I baked cookies yesterday.  Scrumptious, yummy and delish they are. 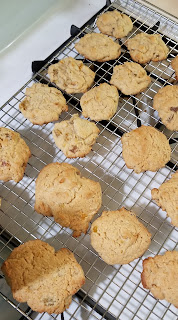 Oh my! Looks like I'll be going  blond this coming holiday season

and maybe trying to learn Viking.
Posted by Dave R at 6:16 AM