Remember when today was called Hump Day, middle of the work week for some of you out there, until Covid - 19 and you began working from home.  My, how things have changed for a number of people, not for me however.  My hours may have shifted somewhat, but I've been going in to work every scheduled work day since this thing began.  For those of you who had problems with the Stay at Home orders, now you know you need to get a Part-Time Job at a Home Improvement store prior to the next pandemic.
Bad news for the Idiot Jerk - Stevie Mnunchin says the unemployment rate has not peaked.
Prepare yourselves, from what I've been reading, with the economy in a slump that will last until sometime in 2021, and the fact that he didn't care how many died from Covid - 19 as long as he wasn't one of them, the Idiot Jerk is seeing "Obamagate" as the only sure way of getting his sagging, orange ass re-elected.  Well, that ain't going to work.  Sure, the rabid MAGA heads who worship at his feet will suck that down faster than a free Wild Cherry slurpee from 7 -11, all it's going to do in the end is give them brain freeze.  Of course, that would mean they actually had a functioning brain.
What's even more interesting is that his re-election campaign is buying up $18.6 million in ad space, much of that being spent in Florida, and it's only May.  Sure, there are those who will say "he's got the buckos in the bank, so why not," but it's May.  Biden, on the other hand, is spending about $3.6 million, because it's only May and the election is 6 months away.  Trying to shore up his base, perhaps, and so early in the season?  I'm catching a whiff of  the new Republican scent, "Early Desperation."  I'm sure, if you like cloying, overly sweet perfumes, with more than a hint of sewage, I'm sure this one will be for you.
No cycling tonight.  It's going to be a rest day for the legs, after 8 days and almost 99 miles.
And for those of you who have been waiting, it is Rose Time. 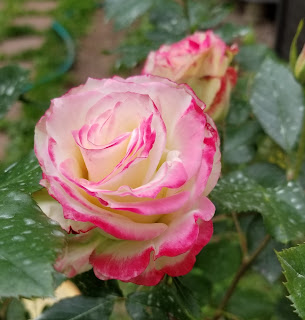 The light dappling on the leaves is the spray I'm using to keep the dreaded 'black spot' at bay.