Floating to the surface

Holy Moly!  I get to go back to work today for 5, maybe 5.5 hours.  One of our specialists is on vacation.  He's going down to North (South ?) Carolina to visit his daughter and his family.  Scheduling has been... haphazzard (yeah, that's a nice word for it) over the past few months and I do want to make sure there's coverage.  For the next 2 weeks I'm scheduled for 40 hours.  That doesn't bother me.  They pop a $100 bonus into your paycheck when you work over 36 hours in a single week so that should give me and extra $200 to spend on...
Someone named Codswallop gave The Body in the Well a 4 out of 5 star review on Amazon.  It would have been 5 except for typos.  One of my readers asked how there could be typos, 3 different sets of eyes did proofreading.  It has to do with the way we read.  Often we will see a sentence as a whole, rather than individual words.  If anybody sees a typo, let me know so I can fix it.  A big thank you to Bathwater who emailed me several.  I also thanked Codswallop for the review, noting changes had been made.  I also Googled Codswallop since I didn't know if it was a real name or not... it's probably one of the worst pseudonyms you can use if you're reviewing books.
I have over 50 miles in on the bike so far this week.  I'm averaging between 60 and 65.  I've also discovered a use for my empty Gatorade bottles.  They make great candle molds. 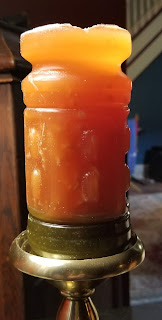 And for those who didn't see, we now have a flag for out Space Force.  And our scientists are working on a "super duper missile,'  It's still in the process of being designed, but in the end it's going to be super duper.  For those of you who don't know, this is called distraction.  The Idiot Jerk is desperately trying to put America's focus on something other than the fact that 90,000 Americans have died from Covid - 19.
Of course, the shit is beginning to float to the surface regarding Tara Reade, and there is a lot of it.  She had complained that her new found infamy was giving her personal information (like her whereabouts) to certain individuals (like ex-landlords).  She's evidently had no problem on taking advantage of them and then skipping her rent payments.  There's at least one lawsuit pending from 2014 (I think).  She's being described as manipulative and a user.  She should have realized this shit was going to come out.  Now we know why legitimate media outlets weren't touching her with a ten foot poll.
Posted by Dave R at 6:17 AM

Email ThisBlogThis!Share to TwitterShare to FacebookShare to Pinterest
Labels: Codswallop, gatorade, Space Force, Tara Reade, The Body in the Well