Well, here it is Wednesday, and I get to go back to work for one day.  I'm off tomorrow.  How cool is that?
I saw someone gave "The Body on the Lawn" a good review.  The funny thing is that every time I pick it up I see problems and mistakes.  It's almost as bad as seeing 'dead people.'  They're everywhere.  Fortunately most of them are in my head.
So, Subaru has this thing called Starlink which is their version of Onstar.  I've had the option of purchasing Onstar in the past and never did; the benefits offered did not justify the cost.  I did upgrade the Starlink to their 2nd level package for 3 years.  If at the end of that time I find it was a waste of money, I'll either downgrade or get rid of it completely.
And the new coffee maker arrived yesterday.  Very nice.  Fast.  And the coffee is hot rather than lukewarm.  While the old one hasn't been thrown out yet, it will be shortly, except possibly for the carafe.  I might be able to turn it into an interesting planter.
I saw "Venom" last night.  What a mish-mash.  Tom Hardy has some really good moments as Eddie Brock... however, he's dealing with a symbiot who, over the course of the film, tends to become cartoonish.  Riz Ahmed plays a nice, cool villain even though you never really get a chance to see that spark of insanity which makes him bad. 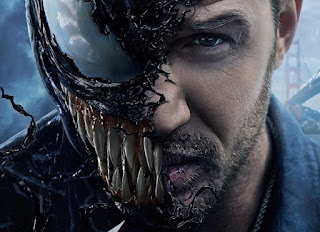 The problem here is that Venom is a dark character.  He eats people.  Men are on the menu.  That's right, Tom eats men.  Bad men.  The producers and writers are desperately trying to make Venom into a nice guy.  He has the one-liners people laugh at, not Tom.  Perhaps because Tom, himself, while pretty to look at, is not that important, which is why the movie is called "Venom," and not "Eddie Brock."
And, of course, the Stock Market is in a slow decline.  It loses a lot, gains a bit back, loses more.  I'm waiting for the Idiot Jerk in the White House to tell people they need to look at their 401k's.  The last time I had check mine it had lost about $5 since April.  And he's doing what he always does, what all Republicans have done since the dawn of time, blame someone else.  The truth is he's not really that good of a businessman.  The country is learning this... slowly.
Posted by Dave R at 6:10 AM