Here we are, Tuesday, and I just made my Mom's rent payment.  I really do hate sending Greenfield so much money.  She is in assisted living, but how much assistance she gets is often questionable.  She gets her meals, that's a given.  She gets her medications on a timely basis, which is nice.  The problem there is that Greenfield kept switching pharmacies.  Initially, prices varied.  Aspirin cost $2.75 a month, and her total monthly bill ran around $80.  With their current pharmacy, everything is Co-pay.  Now aspirin cost $8 a month.  When I get her med bill all of her drugs have an $8 charge and her monthly bill runs $170.  Where the fuck is Congress?
In the not too distant past the Republican Party was fairly regionalized.  Surprise, it's happening again.  In case you are wondering where the Idiot Jerk in the White House is most popular, just turn your heads towards our southern states.  They are also the states in which sentiment towards Confederate war memorials is the highest.  Isn't that interesting.  That one region of the country to get beaten in a war, to be declared the losers, is the one most infatuated with the Idiot Jerk in the White House.  This does mean he doesn't have supporters in other places, he does, other wise he wouldn't have been able to pull out an Electoral College win.  It's in the deep south, however, where this loser finds his strongest loyalty. Oh, and by the way, that's also where racism is highest.  These stats are fascinating, aren't they?
Anyway, I'm off tomorrow.  Having breakfast with my brother.  Won't that be fun.  I aggravate him at times but pointing out bits and pieces of the truth.  This is how life is.
I also have to admit, there's a bit of a debate raging in my head right now.  You see, they brought in a truckload of fruit trees at work.  Fresh fruit, you know?  Picked straight from the tree.  Not apples though.  Some think me odd, but I don't like apples.  They're okay in pies and dumplings, but that's about it.  The fruit of the Prunus persica is the fruit fro me.  A member of the Rose family, related fruits are the cherry, the almond (yeah, it's considered a fruit, not a nut), the apricot, the plum, and the nectarine.  That's right, my favorite fruit is... peaches.  And we have peach trees at work.  And I'm thinking about ripping up some the pavers in my yard and planting... a peach tree.
Now, wouldn't that be peachy as hell!! 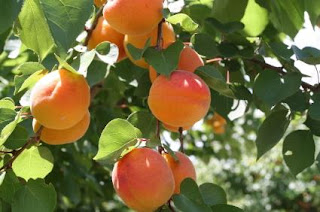