It's in the Details

Well, a good Friday morning to you all.  For some, this will be the last day of the work week.  For me, however, this is the beginning of a 6 day stretch.  Now, ain't that suckie?
I was asked about my writing:  Brief history.  The first time I ever took pen to paper was in 3rd grade.  I had Mrs. Warner as a teacher.  At the beginning of the school year we were given the assignment of writing about "what we did on our summer vacation."  Back then my family didn't go on vacations.  Because most of my Mom's anger issues were rearing their ugly heads, I spent almost the entire summer with my grandparents.  Fiction was more pleasant than the truth.  Instead of detailing the problems, I wrote about how a goldfish bowl in my grandparent's living room began magically overflowing and the room began filling up with water.  Soon, my grandparents and I were swimming around the room with the fish.  It was so much fun.  Mrs. Warner didn't think so.  She gave me a failing grade for not completing the assignment.  That hurt my feelings badly.  For a 3rd grader, it was a good story.
And my copy of Assassin's Creed Odyssey arrived yesterday... one day early.  So, last night I became Alexios. 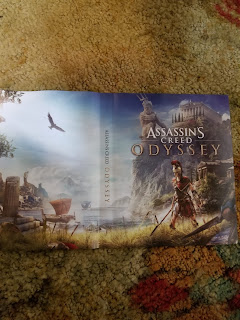 Ubisoft has always been a stickler for historical accuracy, which means I'm about to participate in the Peloponnesian War.  It's all in the details, you know?  The Greeks loved to celebrate the male anatomy, and now I can explore these glorious details.  An interesting side note.  If you move the camera behind Alexios while he's swimming, you can see up his tunic.  Things move.
Tomorrow sometime, Brett Kavanaugh will be voted onto the bench of the Supreme Court.  He wrote some sort of Op-Ed piece for the NYT in which he claimed to have gotten too emotional while giving his testimony.  He claims he is a 'fair judge.'  Does this man have any clue that the moment his vote is strictly down party lines he fails.  If the Idiot Jerk in the White House races to the Supreme Court the minute the Democratic House begins an investigation and the Court shuts it down, Brett fails, the Republicans fail and...  Shit, I can't say the Idiot Jerk fails since he's already the biggest failure in the White House.  I wonder if he even comes close to understanding his every vote is going to be scrutinized for partisan politics.  I don't think so.  But then the Republicans have never been very good on the details.  They love the overview, the big picture which they pray will overwhelm all the tiny fissures and cracks and lies.  It's always in the details where they fail.  They are so unlike Ubisoft, which glories in the small things so much they want you to get in close, and examine them.