Well, I watched some of the debate last night... after it was over, just to kind of get a feel for how bad these things really are, and after a couple of glasses of wine.  Liquid courage, you know?  Anyway, I didn't watch that much.  I didn't see the bit where he'd keep people in suspense about the election results though I did read about his comments this morning... as though he is in any position of authority.  After watching those few minutes, I now understand why he's such an asshole - he is terribly confused.  He thinks this is a reality TV show.  That's right.  He believes he's on something called "Run for the White House."  All of his posturing is in anticipation for his next close-up.  No doubt when this whole thing is over he's going to expect an Emmy nomination for Best Turd.
Enough of that, I was off yesterday and today as well, so I started painting the trim in my living room.  I'm doing it in sections because... to be honest... I hate painting trim.  I hate the taping.  I hate the cutting in, the cutting out.  I hate using a sash brush... carefully.  I just want it to be done. 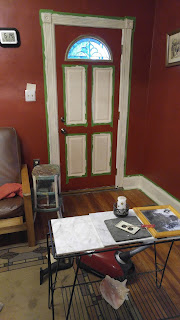 Of course, being trim, it takes a lot longer to paint than the walls since you can use broad swipes of a roller to paint them.  It's not white, rather more of a very pale brown which will make the red of the walls pop.  I can say things like that, you know?  Make the walls pop.  That's one of the benefits for working in paint for years.