Drudge, Trump, and the New TV

So much funniness going on, really, I mean Matt Drudge and the Hurricane.  Sounds like the title of a juvenile adventure novel, doesn't it?  The Washington Post hit's this nail right on the head, well, almost so, they do fail to acknowledge that if any of Drudge's followers actually do fail to evacuate, and do happen to die, their surviving family members will sue him for "wrongful death."
And then there are those Krazy Kristians trying to defend Trump's pussy remarks.  People like Rita Cosby and Phil (don't look at my dick) Robertson and some one named Pastor Mark Burns.  This last guy has actually said in a Tweet that Trump has repented... does this guy have any functional neurons left in his brain?  And Rita?  She did the crazy bit on her WOR radio program.  I checked her out on Wikipedia and her career seems to be in a slow, slow decline as she moves farther and farther to the right.  The next thing you know she'll be wearing an aluminum foil hat.
And what about that Krazy Plane, the Trump Campaign? It's almost as funny as the end of "The Interview."  Sure, it is Trump and not Kim Jung (something  or other), but if you look at any recent picture of him, and cup your hand round your ear, you can almost hear Katy Perry singing "Firework."
Finally, my new Sony UHD 4K TV arrives this morning.  Pilot Freight is delivering it, not FedEx or UPS.  They will actually unpack it, set it up, and plug it in to make sure it's not broken.  Amazon is starting to do this with Flat Screens.  Smart move.  Anyway, as a means of celebrating, I order the new Gears of War Xbox Slim.  It arrived last night. 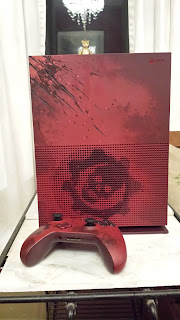 As you can see, it's red to go with my living room.  Unfortunately I have to work this afternoon, so I'll have to wait until tomorrow to really set it up.  That's okay.  I'm the patient sort.