That's right, something pesky nipped him, or else he ate something that didn't agree with his system.  Dogs do that, you know?  Everything was fine when I got home.  He and Lily got their dinner.  They went outside to play while I made chai tea.  When I opened the back door to let them back in the house, however, I noticed he had started to swell.  Little lumps all over his back, and on his chest, where the hair is thin, they were blotchy pink.
So I gave him a Benadryl.   When your dog weighs as much as a small human being dosage is the same as it is for an adult.
Two hours later his jowls were doubled in size.  And I thought, shit, I'm going to have take him to the emergency room.  He didn't seem to be in any discomfort.  He had no problems eating biscuits.  He was just swollen.  So I thought, we'll give it over night. see how he is in the morning. 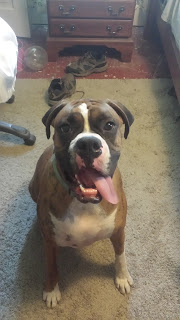 This morning he was fine... except for a slight case of diarrhea.  That's easily remedied.  He's had that before, you see, because that big mouth of his seems to swallow whatever it wants.  And because he's so big, he gets the same treatment you or I would take.  It's minty green.  Loves it.  In fact, every time he gets dosed his reaction is always the same.  "Holy Crap, pour more of that green, minty heaven down my throat."