Of course I had to write something about those idiots and Texas relaxing even farther their already relaxed gun laws.  Dummies.  I don't know who the idiot was who first said you'd be safer if you carry a gun and probably will never know since he's probably already dead, shot in the back, no doubt.  When I brought up the subject at work and said that openly carrying a weapon is going to make you a walking target I found myself drummed with the disbelief that quite the opposite, carrying a gun is going to make you safer.  Bullshit.  When I pointed out that I suspect most shooters who enter rooms are going to first aim for the guy with the gun, one person actually said, "well, what if they're all carrying guns."  I'm quite serious.  Somebody actually said that to me.  Hhhmm.
Anyway, I pointed out that there was some serious gun control going on in the old, wild west and, of course, no one believed me, so I emailed a couple of them a copy of this.  Did it change their minds?  Even a smidgen?  Nope  They think it's liberal propaganda.  In fact, one went to far as to send me a graphic of dubious origin which proved that gun deaths have gone down since more people are now carrying weapons.
Now, this isn't everybody, not by a long shot, only those who like to consider themselves conservatives.  Oops, wait a minute, conservatives are totally for liberal gun control?
Anyway, I suspect things will slowly begin to change. 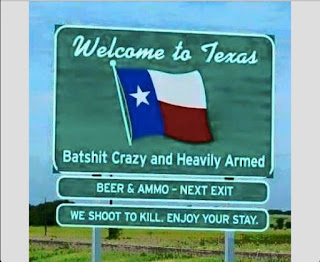 When gun violence doesn't drop and more and more people get shot to death, some not-so-brilliant politician is going to jump up on his little soap box and say, "we need to put a stop to this," and, most likely, it will be some moronic Republican, totally unaware that it was his / her party that got us into this mess in the first place.