Oscar and the Money Shot

A lot of people are upset with Oscar voters again this year because there no black films nor any black actors nominated.  And, like last year, that maybe these complainers should stop expecting what is probably one of the most liberal voting blocks in the country to be politically correct. That is what some want, isn't it?  For Academy voters to pause, and then do what some people feel they need to do; well, as I said, most of these people are the definition of 'liberal' so it's probably not going to happen.
My theory on why no black actors were nominated?  None of them hit the money shot.  Now I know that's a term most associated with the porn industry, but most non-porn films would not succeed without their version.  The money shot for an actor takes a good performance and seers it into your heart.  Let me give you some examples:  Denzel Washington won his first Oscar for a film called "Glory."  His performance was outstanding, but his money shot came when, while being whipped, a single tear ran down his cheek.  I saw that movie with a theater filled with white people and that one moment broke everyone's heart.  Cloris Leachman's money shot came with a coffee pot in "The Last Picture Show."  Forrest Gump sat down with his 4 year old son in front of a TV.  Matt Damon might win the Oscar this year because his money shot came towards the end of The Martian when he's strapped into a seat and the camera zoomed in for a closeup.  The money shot comes when you change places with the actor and you feel his joy, or fear, or pain. 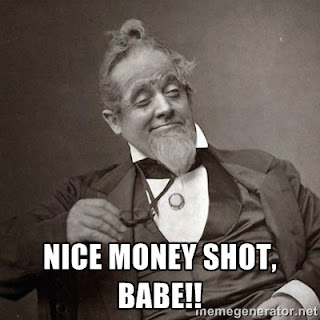