Crazy seems to be the hardest word

Since everybody in the free world seems to believe that Texas has gone totally loco (except Texans), I thought I'd write a little about 'crazy.'  Whether people want to understand this or not, our daily lives are almost completely controlled by neurotransmitters.  Our likes and our dislikes are all controlled by the sequence in which they fire.  My friend Steve will flat out tell you he's a dopamine junkie, he gets his kicks by running over 100 miles a week, every week.  He's a really nice guy, however when he says "I need to go run," nothing's going to stop him.
Complicating things is the fact that so many outside influences can effect these transmitters, chemicals (drugs and and cigarette smoke and alcohol) being one.  People become drunks or druggies because the things they ingest or inhale excite certain transmitters.  This is why many smokers have such a difficult time quitting, nicotine triggers a sequence of neurotransmitters their neurons like too much and they become addicted, at least this is how I see it.
Unfortunately, for us humans, there are so many outside influences which can effect the way these transmitters are working.  If Adele's "Hello" comes on the radio and you begin to feel a little melancholy, well, that's your neurotransmitters at work.  If you wander into one of those Evangelical Mega Churches and experience the lights, the sound (sing it baby, sing it!) and find yourself going crazy for Jesus, that's your neurotransmitters getting all holy on you.  Sanity is when those around you share the same transmission patterns.  Insanity is when, as in Texas, that group of patterns is out of sync with the rest of the world. 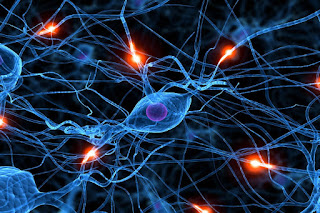 It also happens when Donald Trump opens his mouth and shit falls out.  In certain individuals those word turds tickle certain neurotransmitters into firing, and they like what they hear.  Are they crazy?  Hell yes.  Do they know they're crazy?  Hell no.  Now, I don't know which neurotransmitter it is that is sending his Trumplodites into such a frenzy, but I'm fairly certain it isn't dopamine, other wise they wouldn't be shouting out their "rah! rah! rahs!."  Hell no, they'd be too busy burning up treadmills at Planet Fitness with Steve.