White trash at the State of the Union

I didn't watch President Obama's last State of the Union address, I worked.  However, I did see that Kentucky's Queen of White Trash did manage to get a ticket.  And, of course, people were curious.  And, of course, her pimp Mat Staver said an admirer had given her the ticket, which was true, however the admirer isn't exactly bragging about it.  That admirer was none other then Jim Jordan, Representative from Ohio, a man who's been given several awards by the anti-gay establishment, and now his office is saying they didn't know who was getting the ticket.  Ahh, I smell bullshit, since he and her pimp seem to be on a first name basis.
Anyway, I thought it interesting that Kim decided to dress up in true White Trash Fashion. 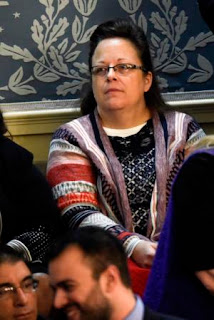 She wore some sort of frock with an American Flag jacket.  Of course, it isn't really an American Flag, just the red, white and blue and stars.  You know, if that had been a Democrat, or an Independent, the crazy conservatives would have been throwing up a shit storm.  But for White Trash Kim, that kind of get up is fine and dandy.  She's proving that she's a true American wack job, the same kind they hold near and dear in their crazy, conservative hearts.