Trumpless on a cold, snowy night

Tomorrow it will be 1 weeks since we had our super snowstorm, my street is clean, however they still haven't come to collect the garbage.  One of my neighbors called the Township Office and was told that garbage will be picked up sometime next week, most likely around Wednesday.  It was supposed to have been picked up this past Tuesday, which means that there are garbage cans and recycle cans sitting in front of every house, an attractive sight, let me tell you.
And, there was a debate last night.  Trump wasn't there.  From what I've been reading his absence actually benefited his campaign.  My brother, a part-time Methodist Minister and full time Republican hates him, well, let me correct that, the Minister part doesn't hate him, it's the Republican part that's gnashing his teeth.  When I told him that Trump was killing the party he wailed "I know, I know!"  This is life.
You make your bed and then you sleep in it.  If you're a member of a party the festers hate for everyone who disagrees with you - well, you get Trump.  He is King of the Birthers.  He is a magnet for racism.  He has taken the Republican playbook and, after some open modification, made it his own.  Trump is the face of the true Republican.  And they had a debate last night and he didn't go, and instead of attacking him, the debaters attacked themselves.  They are eating their own. 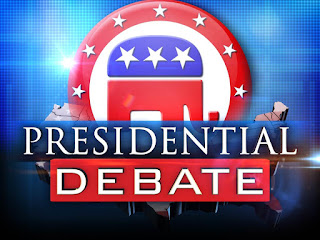 I told my brother that the GOP will soon stand for Gone Old Party, and he lowered his head in disgust as he agreed.  "Trump is truly frightening," he said.  Well, maybe not if you're a neo-Nazi, racist, fascist, demagogue.