Glancing through the NYT yesterday morning, I saw an article on George Lucas where he said that Disney had sold Star Wars to white slavers, or something to that effect, and then retracted the statement.  Hhhmm.  Sounds like sour grapes to me.  He sold Lucasfilms, and the rights to Star Wars, for $4 billion dollars and then compared it to going through a divorce.  What an idiot.  They evidently said "thanks a lot, George, see you later," so he had no involvement with "The Force Awakens," which is no doubt part of the problem.  I think Disney did the right thing.  Looking back at the last 3 Star Wars films I have to say that, while they made a lot of money, they were totally forgettable.  The actors involved have put as much distance as possible between those films and their careers.  That's right, they were bad movies.  Everything was CGI, including half of the characters, which seems to be one of the problems Lucas has with the new film, they're not original enough.  This doesn't mean The Force Awakens doesn't have CGI, it does, but there are also some really neat set pieces, like a light saber duel in a forest... in the snow.  When I saw that scene I wanted to tap George on the shoulder and ask, "hey, why didn't you do anything that original in any of those 3 silly prequels you foisted on the fans?" 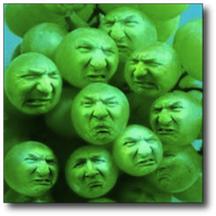 And let's be honest, this was a $4 billion dollar deal.  Nobody twisted his arm.  And it's not as though the film fell flat on its face at the box office.  No, what happened is that Disney took a moldy franchise and turned it into a mega-hit.  JJ Abrams' monster hit makes the last 3 films in the series totally irrelevant.  People will watch Episodes, 4, 5 and 6 again, but very few will watch 1, 2 and 3; there's no reason to watch them.  What George needs to do is quit his whining and sit back and count his money.