For Al Sharpton, the boycott of the Oscars is evidently a black issue only.  Of course he doesn't know what he's talking about, that much is evident when he says blacks are responsible for 40% of the ticket sales in the United States.  Does he really think 14% of the population buys that many tickets?  And he also thought "Concussion" was a good movie - does he know it played in most theaters for what?  All of two weeks?  And he only names 2 black films.  In reality there were one hundred and eighty some films released in 2015, which is about .0108695% of all the films released in the U.S.  Al, get over it.

Of course, then there was the hilarity of the GOP clown parade, a phrase I haven't heard for some time.  Sarah Palin announced her support for Donald Trump.  Holy Shit!  Like that endorsement is going to give his campaign any type of validity.  And then I saw this picture: 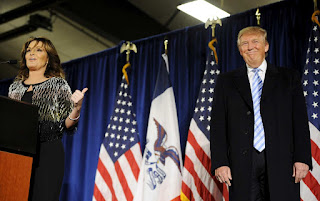 And you thought clowns were only frightening when they had their makeup on.  Oh, wait, someone just told me she's not endorsing him, she's announcing his being cast in title role of Stephen King's "It."  Maybe that's why she failed to show at his rally in Iowa.  Or maybe she was too busy returning that outfit to K-Mart, hope she didn't snip off the price tag.