For those of you who don't know, a piece of what astronomers are classifying as space junk is set to crash into the Indian Ocean.  They're calling it space junk because they don't exactly know what it is, but because they seem to think that it's hollow they're assuming the planet of origin is Earth.  They've given it the name WT1190F, indicating that when this unknown object was discovered, astronomers across the planet wondered WTF is that?
So, what if it isn't man made?  What if it happens to be alien?  That would be pretty freaking awesome.  And I have to admit, I'm kind of leaning towards the alien origin because, with the computers astronomers have at their fingertips, they could just back track WT1190F's orbit and determine who and when it was shot into space. 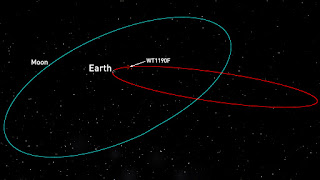 They done the backtracking bit rather efficiently on other things, why not this?  I mean, they've taken the moon's orbit and the earth's orbit and gone back billions of years to determine it was formed when another, smaller planet collided with the earth.  If they can do that, surely they should be able to tell us who's responsible for this bit of junk.
What if WT1190F isn't actually completely hollow?  WE don't know.  It might be carrying something, an alien cargo, perhaps.  For all we know this might be the prelude to an invasion.  Who's to say it isn't?  It might contain a zombie virus.  Or maybe something worse, a plague that turns the whole world into Republicans.