Kim and her pimp dine on Cow Pate

So it seems her meeting with the Pope was not as private as Kim Davis, and her pimp Mat Staver, would have the world believe.  While she, and her pimp, would have liked everybody to believe the Holy Father was in full support of her position, this is not the case.  And these press releases are everywhere.  The Vatican is putting as much distance between the Pope and Kim Davis, and her pimp, as possible.  The other day when I'd read that her pimp had said "the how and why" of the meeting were not important, it was the meeting itself which counted, I started wondering.  Lo and behold, the nuncio (the Vatican's ambassador) knows her pimp, and he is the one who arranged the meeting.  One suspects this whole thing was engineered to pin the Pope into a corner, forcing him to take a stance against marriage equality.  People who hate will stoop to any low measure.  And, of course, her pimp is flipping out.  I like the bit about how "she changed her hair style" so she wouldn't be recognized.  This is really funny because what her pimp was going to be their 'coup de gras' has turned into a stinky pile of shit. 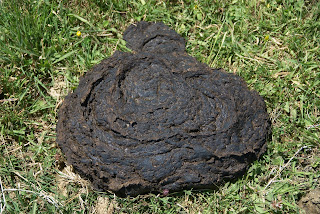 Anyway, one can only wonder about the power of their deity since He seems to have the Pope's back, and as a result they're now eating shit.  Oh, wait, that sounds vulgar... let's say their dining on Cow Pate.