This past week, besides being a bit hectic at work, was also one of much hilarity on the Internet, know what I'm talking about, the ironic funny stuff.  Like Kim Davis' pimp Mat now saying that those marriage licenses issued by her office, without her name, are legal documents, which is different then what he and that cow he's pimping out were saying a few weeks back.  Probably because that scammy bullshit they tried to pull with the Pope backfired.  Wouldn't you think that if their Deity were on their side the whole world would have been flummoxed?
Then there was Trump's second attack on George W. Bush, which was really a ha ha ha.  The problem with the Republicans is that they are living in an alternative universe, one in which everything they do is wonderful. They love changing history, you know? And of course Jeb, who wants to prove there is a least one Bush in the family who can be a adequate president, objected.  There is no way they are ever going to admit that W was one of the worst presidents in American history.
And another funny thing was Reince Priebus' comment about the 2016 election. 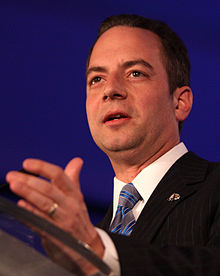 I suspect he said that because he now realizes that everything is getting flushed down the toilet.  Not one person in the Clown Parade is electable.  Only an idiot can see either Trump or Carson in the White House.  Priebus knows this.  He is, no doubt, trying to get the wagons into a circle in order to survive the Indian attack without understanding it's not the Indians who are attacking, which is more of their alternative universe.  A closer analogy would be a horde of Republican lemmings racing towards the edge of a cliff.  At this point, I don't think anything is going to stop them.